Feminine yoga: what is it and why we need it?

Traditionally, yoga has been a male-oriented practice, and yogic teachings were passed on from male master to male student. It can be said that these practices were not necessarily created to support a woman’s body and life. Most of the popular yoga teachings today originate from a male creator, including the very popular Iyenga and Ashtanga traditions. I would argue that this inevitably influences how we experience, teach and practice yoga and that many women actually need a more feminine yoga practice. Read on to discover how you can build feminine home-yoga practice.

Collectively, we live in a time in which there is a great need for the re-emergence of the ‘feminine’. We have been living under a dominant patriarchal culture that in so many ways is no longer serving humanity.

Despite the recent historical roots of yoga being the domain of men, early history shows that women played a key role in the community and practice of yoga. For example Uma Dinsmore-Tuli in her book Yoni Shakti, provides an overview on the history of women in yoga showing that women invented yoga around 7 BCE and that it was the increase in Brahminical laws that brought restrictions to women’s roles and social status. Women’s involvement remained strong through the Tantra and Bhakti traditions. Importantly, one of Tantra’s key features is an emphasis on the power of female deities and practitioners.

I would argue that our society is largely out of balance and that the masculine qualities are given more weight overall. Glance into any corporate environment and we see qualities like control, power, lack of emotion and intense drive being valued and prioritised. A more feminine approach to life in general, and yoga specifically, is where we cultivate and nurture the feminine qualities of connection, receptivity, fluidity, surrender and nonlinear thinking and behaviour.

We are at a moment in time when now more than ever we need a yoga practice that acknowledges the feminine and recalibrate the balance between the feminine and the masculine in ourselves and our communities.

My journey with the feminine

I discovered a feminine approach to yoga in my early 40’s in the midst of a major health crisis and turning point in my life. I had been working in leadership roles in organisations, moulding my feminine self into the patriarchal culture that work environments required of me. The yoga at the time I was practicing whilst it helped manage stress, did not nourish nor support my feminine self.

Once I discovered a feminine approach to practice and teaching yoga, it was life transforming. Now I meet women in all walks of life, that on a deep level are looking for something more to their yoga. Many women describe to me negative experience in yoga classes, being ‘pushed’ into postures that don’t feel right, being touched inappropriately, or simple not finding yoga classes welcoming to their particularly body shape or size.

In my experience, and many women that I teach, the traditional male yoga lineages do not acknowledge nor support the cyclical variation inherent to a woman’s body and life. While these traditions in my experience do offer some variations (e.g. no inversions during menstruation) the practice was not designed with a woman’s body, and life, in mind. Therefore, a woman’s foundational needs, including physiology, psychology, emotion need to be considered at the heart of any yoga practice.

What is feminine yoga

A woman’s physical body by its very biological make up is very different to that of a man. Women’s health and vitality are strongly influenced by our monthly menstrual cycles, the cycle of the moon and our life stages.

For example, our practices can be quite different at ovulation and or full moon, compared to menstruation and the dark/new moon. Additionally, a woman in the height of her role as a mother, her yoga practice is going to look very different to a young maiden, or a retired Maga or Crone.

Instead, when yoga is practiced in a feminine way, including adapting our practice to the phases of the moon, we can honour the stages and the transitions in our cycles as a part of our yoga practice.

Feminine yoga is much more than yoga postures that are adapted for a woman’s menstrual cycle (though, these cycles are important). Feminine yoga is not limited to a particular style of yoga or series of asana, although there can be more womanly postures, particularly with a focus on the hips, which can be a great source of tension, as well as power for a woman.

Instead, it is more about a shift in how you approach your yoga practice. Feminine yoga needs to be fluid so as to be supportive of where a woman is in relation to the cycles that influence her life. The cyclical nature of a woman life is far more tangible than for a man and it simply makes sense to connect our bodies to the cycles of our lives, including the menstrual cycle, the moon cycle, our life stage, and the seasonal cycle.

One cycle that we are all familiar with is our monthly menstrual or moon cycle. If you are menstruating, you can take on a more dynamic flowing practice at ovulation and engage in yin, mindfulness and restorative yoga at the time of menstruation. If you are menopausal, your monthly cycle can be attuned to the moon. You can engage in more dynamic practices at a full moon and more inward and mindful practices at the new moon.

Our yoga practice will also be influenced by our life cycle. Whether you are in the Maiden, Mother, Maga or Crone phase, this needs to be considered within your yoga practice. Maidens and mothers may be drawn to a stronger, more dynamic yoga, whereas women in the Maga and Crone life stages may require gentle slow flow, yin, mindfulness and restorative. For example, I have met many women who were dedicated Ashtanga yoga practitioners, who in mid-life, experienced burn out from such an athletic strong practice.

How to create your personalised feminine home-yoga practice

Once you have set up your home-yoga space, here are some suggestions how to cultivate your feminine yoga practice.

Subscribe to my newsletter to receive my monthly newsletter with yoga inspiration and resources delivered straight to your inbox. I aim to only send relevant information to inspire and support you on your yoga journey

You are now part of my yoga community 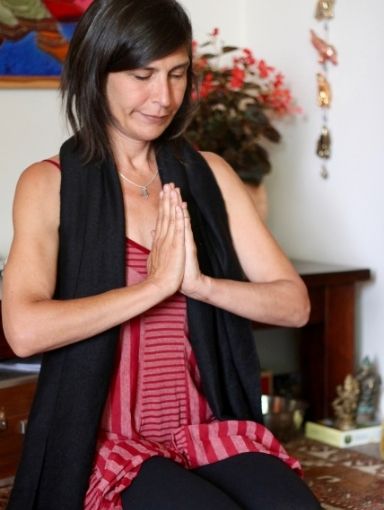 You are now part of my yoga community